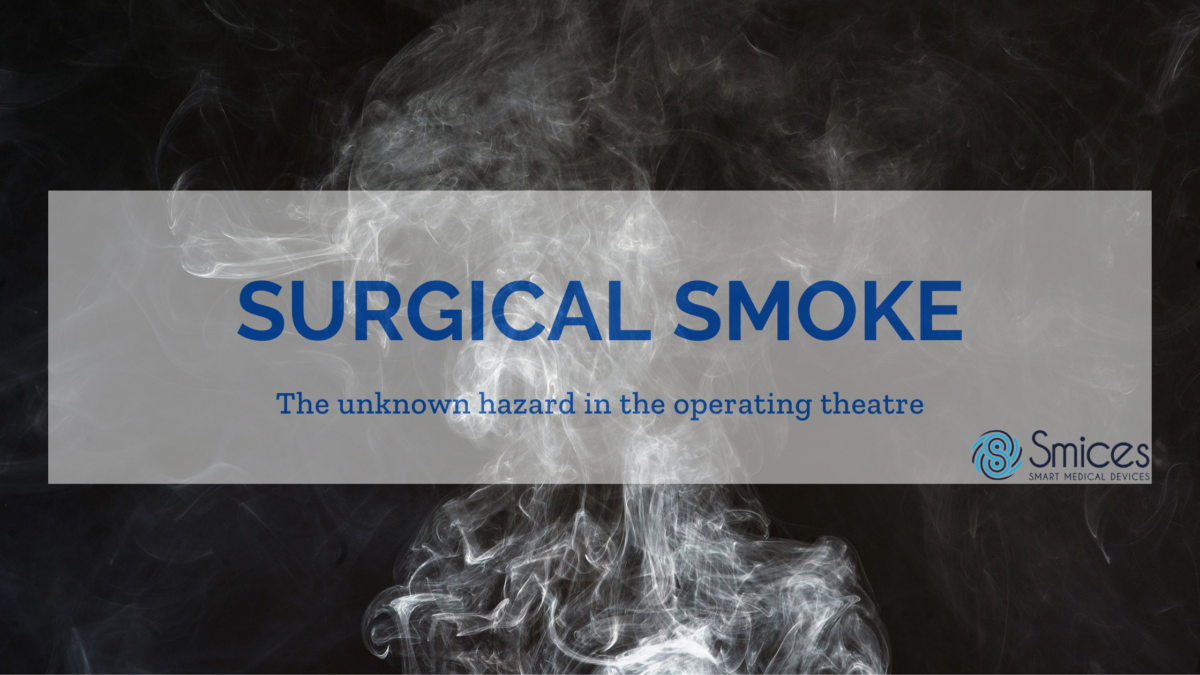 For some years now, various non-invasive techniques have been favored in surgery, including laparoscopy. This technique reduces the risk of post-operative complications, thus improving the patient’s comfort after the procedure. However, this technique is not without risks: toxic fumes are produced during the surgery, exposing the operating room staff to health risks.

1. What is surgical smoke?

In recent years, minimally invasive surgical techniques such as laparoscopy, use heat or ultrasound in order to cauterize or cut through tissue. However, during these procedures, surgical smoke is produced and then released into the atmosphere of the operating room.

These smokes are made up of 95% water or steam and 5% cellular debris composed of chemicals, and bio-constituents such as blood and tissues particles, viruses, and bacteria. The concentration of the cellular debris varies according to the technique used and the tissue on which the surgeon intervenes.

Among these components, we can find many volatile organic compounds (VOC) including aromatic hydrocarbons such as benzene, toluene, ethylbenzene, or xylenes.

Moreover, pollutants that are produced by the action of burning tissues can be found in the smoke.  These include carbon oxides (O2 and CO2), sulphur and nitrogen oxides, and ammonia.

On the other hand, quantitative analyses have confirmed the presence of biological pollutants of several kind:

2. The potential risks of surgical smoke

In 1977, Y. Tomita highlighted the fact that the surgical smoke generated by electrocoagulation is 2.6 times more mutagenic than cigarette smoke.

A few years later, in 1995, Dr. Hoglan once again questioned the toxicity of these smokes: 1 gram of clotted tissue for 15 minutes can cause as much harm as 60 cigarettes!

Exposure to the surgical smoke can causes acute symptoms: the more regular the exposure, the more acute and important the symptoms felt. Thus, the medical staff may experience pain and discomfort, such as headaches, nausea, muscle weakness, fatigue, eye, and/or respiratory irritation.

More serious and specific effects are conceivable, but so far only mutagenesis and carcinogenic risks have been evaluated. However, four studies have suggested that some infectious diseases could spread through surgical smoke: three gynecologists and one operating room nurse developed laryngeal papillomatosis and HPV diseases, due to the daily use of electrocautery devices.

In addition to the harmful effects on surgical teams, theses smokes are hindering the vision of the surgeon: being present in the pneumoperitoneum, they degrade his visibility.

In order preserve the health of the surgical teams as well as that of the patients, it is thus essential to secure the operating room area with a smoke filtration and evacuation mobile system.

This website uses cookies to improve your experience while you navigate through the website. Out of these, the cookies that are categorized as necessary are stored on your browser as they are essential for the working of basic functionalities of the website. We also use third-party cookies that help us analyze and understand how you use this website. These cookies will be stored in your browser only with your consent. You also have the option to opt-out of these cookies. But opting out of some of these cookies may affect your browsing experience.
Necessary Always Enabled

Any cookies that may not be particularly necessary for the website to function and is used specifically to collect user personal data via analytics, ads, other embedded contents are termed as non-necessary cookies. It is mandatory to procure user consent prior to running these cookies on your website.